The only official website –- and, in all probability, the only factually correct website –- for the author Benjamin Hoff.

Is Volvo on the Right Road?

Here's a quick quiz -- let's call it Will The Real Volvo Please Stand Out? Which of the three new concept cars pictured below is a Volvo? 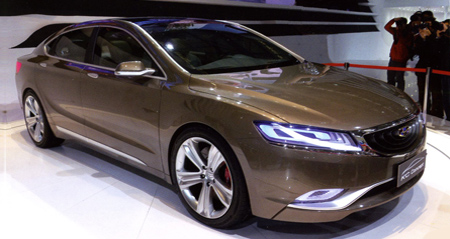 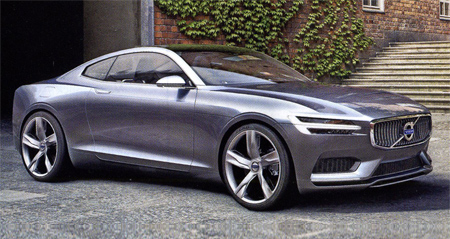 The answer: Top right is the Volvo Concept Coupe. (Top left is the Geely KC, on the bottom is the BMW Pininfarina Gran Lusso Coupe.)

If you could identify the Volvo, I'll bet it's because of that honkin' big Volvo emblem on the grille. Maybe they should have made the emblem bigger -- maybe it should have covered the entire grille. Then people would know that the car's a Volvo. Otherwise, how would they?

The late Shoji Hamada, the revered, world-famous potter who was in his lifetime designated one of Japan's Living National Treasures, was often asked why he didn't sign his work. He would reply that his work was itself his signature, and that to add a signature to a signature would be superfluous. What he was talking about was something called identity.

Regarding styling, at least, Volvo has lost its identity. The only styling that it seems to have retained from its pre-Ford, pre-Geely past is an emblem. It has kept that cluttered old emblem and discarded the rest. The company would have been wiser, in my opinion, to have discarded the emblem and evolved the rest.

About the styling of the Volvo Concept Coupe, and of all the other manufacturers' look-alikes: I have nothing against snakes. I've met quite a few, of various sizes, and have rescued quite a few from danger. One rescued snake came over to see me later, as if to thank me, and we had a nice visit. Unlike a great many other people, I have no anti-snake bias. I do, however, have something against cars that look like snakes. Snakes don't imitate automobiles; why should automobiles imitate snakes?

Cars, rather like people, have characters, personalities. And, rather like people, they have faces. These faces can attract, or they can repel. It seems bad psychology to do what so many automotive designers are now doing -- creating automobiles that look angry, mean, venomous, sinister, and threatening. Who wants an angry-eyed, nasty-looking automobile? I, for one, do not. I don't want a car that looks as if it'll jump me as soon as my back is turned.

Since Volvo is now owned by a Chinese company, it might benefit from the opportunity to learn the Chinese principle of “one step back, two steps forward." In this case, the saying would mean: Go back to the past, take the best from it, and use that to achieve the best future. Don't just dissolve it; evolve it.

When Volvo was owned by Ford, Volvos came to look like Fords. Now that Volvo is owned by Geely, Volvos are beginning to look like Geelys -- if the styling of the Concept Coupe is an indication of the new direction, and it presumably must be.

As an alternative, Volvos could return to the state of being Volvos, move forward as Volvos, and leave the mean-and-angry copycat styling to the Big Boy auto manufacturers, who are not exactly known for their originality, or for their sensitivity to what people want. (Do they ever ask what people want?)

As a relatively small player in the auto world, Volvo would do well, I think, to study the Columbia Pictures movie Moneyball (Brad Pitt, Jonah Hill), which is based on the true story of how the gutted, cripplingly underfunded 2002 Oakland Athletics baseball team rebuilt itself, and in the process set a new American League record and changed the game of baseball. There is a good deal of tough-minded wisdom in the story that can be utilized by a smallish auto maker -- or by any other “underdog" trying to survive in a world dominated by the Big Boys. I'd recommend paying particular attention to the following segments, designated here according to DVD-player counter numbers: 10:15-12:37, 19:19-21:25, 25:30-36:38, 1:20:58-l:28:52, 1:35:57-1:38:51.

To briefly summarize the story: The Oakland Athletics' general manager, former ballplayer Billy Beane (Brad Pitt), rejects the standard approach to player selection in a meeting with his inside-the-box-thinking player-selection team. "If we try to play like the Yankees in here," he tells them, "we will lose to the Yankees out there." He joins up with a recent Yale graduate (played by Jonah Hill), who has a very maverick philosophy of how the game can be played, which no one will listen to: "Baseball thinking is medieval. [The ball clubs] are asking all the wrong questions. And if I say [that] to anybody, I'm ostracized."

The new management duo assembles a team of "misfits" -- overlooked-talent players who come cheap because they've been rejected by the other clubs' selection committees for various reasons. After losing fourteen of their first seventeen games -- to the undisguised delight of the old guard rivals and sportscasters -- they replace some players who aren't working well with the rest, and apply some unusual coaching methods and playing strategies. And then they start to win games. And they keep on winning.

At nine consecutive wins, the Athletics tie the achievement of the celebrated 1927 New York Yankees.

At sixteen consecutive wins, the A's achieve the longest winning streak in baseball in twenty-five years.

The end of the story: As a result of the Oakland Athletics' amazing string of victories, other ball clubs start to change their approach to baseball, in line with Oakland's. At that point, what I see as baseball / auto industry parallels break down -- which is a good thing for any relatively small auto manufacturer to consider.

In the auto-manufacturing world, unlike the world of baseball, the major players are dinosaur corporations that cannot change direction quickly -- and, in at least some ways, cannot change at all. Consider the fact that all three of the Big Three American auto makers have now been saved from bankruptcy by the U.S. government, after they got into trouble because in one way or another they could not, or would not, change. They were too big, too spread out in too many directions, too inflexible. Like overbuilt race cars, they had too much weight, too much power, too much forward momentum to track through the curves, and they ran off the road.

To return to the baseball world for a principle that an underdog auto maker could work with, I'll borrow the one expressed by Billy Beane, rewording it as: If you imitate the Big Boys when you're styling in your design studio, you will lose to the Big Boys in the automotive marketplace. The same thing applies to the engineering of the mechanical elements. If you play the game your way, and you play it well, you can win. If you try to play it their way, you will lose.

Like the baseball clubs of a few years ago, the auto industry is dominated by herd-mentality thinkers. Even a quick look at the new car designs ought to be enough to convince anybody of that. The only particularly noticeable creative thinking now is in the electric/electronics area. (Which in my view is a dubious road to travel, for reasons of human health and safety, and other matters.)

If you can design automobiles that look different from, and are more attractive than, the other new automobiles out there (almost all of which now look the same in many ways, thereby making your job easier), if you can produce automobiles that outperform the rest in horsepower and fuel mileage (not just one or the other), and if you can give your automobiles a strong, easy-to-recognize identity, what competition will you have?

Return to the home page here.